Community members from Cité Soleil, a large area in Port-au-Prince, Haiti have begun a fundraising and participatory social media campaign to acquire the resources to build a community library. Cité Soleil is located next to the ocean on the outskirts of Port-au-Prince. It is often described in the media as the “poorest slum in the western hemisphere” and is associated with images of gangs and violence. But there is so much more to it than that. Cité Soleil is home to over 300,000 people, the majority of whom are working to make an honest living for their families, with many striving to influence positive social change in the community.

FACHaiti, a Cité Soleil-based cultural organization made up of young intellectuals, came up with with the idea to build a library for the community. They approached Konbit Solèy Leve [Rising Sun Collective] for advice on how they could collect resources. Konbit Solèy Leve is a social movement founded in Cité Soleil in 2011 whose vision is for a future where the community is able to overcome divisions and take its destiny into its own hands.  It is an a-political, unregistered, non-hierarchical social movement that is built on the traditional Haitian practice of konbit, grounded in the principles of participation, solidarity, and reciprocity. Leveraging local resources for a community vision while reaching across neighborhood divides is a key part of the Konbit Solèy Leve movement. 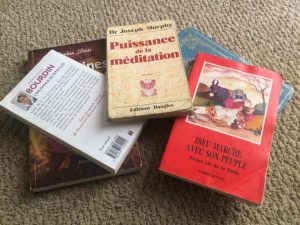 So together, FACHaiti and Konbit Solèy Leve developed the idea to carry out a community-driven fundraising and participatory social media campaign leveraging the resources of the community as well as friends.

Participants in the campaign take a selfie with their donation and post it to Facebook starting with the catch word “Flash!” then give their own explanation for why they want to see a library in Cité Soleil. They then note what they gave, accompanied with hashtag #KonbitBiblyotek. Donations are already coming from around the world, from Cité Soleil, to the Dominican Republic, the United States, Great Britain, Slovenia, and Iraq! Public documentation of donations facilitates transparency, and social media participation builds excitement and momentum. Both books and cash/cheque/PayPal donations are accepted. Books are accepted in any language, but are especially helpful in English, Kreyol, and French. For information on how you can donate and participate from where you are, contact Louino Robillard at [email protected].

To learn more and see the progress of the campaign, visit the Konbit Bibliyotèk Site Solèy page on Facebook here and read Konbit Solèy Leve’s blog post about it here. e-NABLing Haiti
Starting last summer, a group of e-NABLE volunteers came together to develop a concept for…